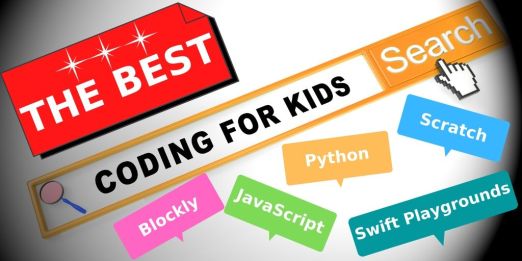 The world of coding for kids can be daunting – especially when it comes to choosing their first coding language. However, there are so many different programming languages to choose from, the question arises where should you start?

Don’t worry! We are here to help you decide. Here is a curated list of really useful programming languages that the kids may enjoy.

Primarily developed for kids between the ages of 8 and 16, Scratch is a free-to-use educational programming language developed by Mitch Resnick and patented by the Lifelong Kindergarten Group at the Massachusetts Institute of Technology (MIT). Thanks to its intuitive and highly visual interface, it is arguably one of the most well-known block-based programming languages aimed at kids and new coders.

The whole concept behind creating visual-based coding languages for kids is to simplify the programming process. Using a visual, block-based language like Scratch frees kids from textual technicalities so they can focus on learning (and mastering) the fundamentals of coding. Anybody – regardless of their experience level – can create animations, games, and interactive stories with Scratch.

The two platforms seem pretty similar at first glance. Blockly also uses a drag-and-drop system to help kids learn to code and like Scratch, this eliminates the risk of technical errors and allows kids to focus on the fundamentals.

The primary difference between the two is that Blockly – as a visual, block-based programming language for kids – is actually made up of several preexisting coding languages.

During the program’s completion, Blockly runs it through a check-up process (similar to the process of debugging textual code). The solution is not correct or the program does not run as it should, so Blockly analyzes the code again until it finds the error and highlights it for the user to locate and correct.

An actual working Android app can be developed by anyone using this highly visual, clean way of coding. Yes, Blockly can be used to develop real applications. Blockly was designed as a coding language for kids, yet its capabilities make it so much more than that.

Python is another excellent language for kids to learn coding. Python is a scripting language named after the Monty Python series and is considered one of the easiest to learn, as it requires a minimal amount of code to run.

Not only video games or web frameworks, but Python is also widely used in more complex fields such as cybersecurity and artificial intelligence!

Python uses an intuitive coding style that uses text-based commands based on the English language – making it simpler and easier for children to understand. Due to the user-friendly nature of Python, kids are able to write lines of code quicker than other popular programming languages such as Java and can create their own games, animation, problem-solving exercises, websites and program robots.

For those who are interested in design, HTML and CSS may be the languages to get into web development and web applications. HTML & CSS is super easy to learn, You actually can learn the basics of those in a few hours.

HTML is the code that most web pages are written in and defines how the information on a web page is structured. The CSS code then specifies how the web page looks: including colours, fonts, and other design aspects of the page! Together, these languages give all the basic skills that you need to make a basic web page — making them perfect for students that enjoy art and creativity in website development.

By understanding HTML and CSS, you will soon be able to get a grasp on other technologies much more quickly and easily, these include JavaScript, PHP and SQL and Python.

Another cornerstone of web development, JavaScript is typically used alongside HTML and CSS — defining how the website behaves and how users can interact with it. Although not quite as easy as Python, JavaScript’s syntax is still easier than most advanced coding languages.

JavaScript is an object-oriented and procedural programming language that’s used for front-end or client-facing applications, meaning its actions are executed on the user’s computer.

The language is very popular, supported by many users (and jobs!), and is native to all web browsers. JavaScript is most commonly used to make complex and interactive web applications but not limited to modern games, apps and digital art.

Despite the fact that programming languages may differ greatly in their implementation, they are fundamentally similar, which is one of the great things about computer science. So when your child starts learning one language, they are already gaining skills to apply to other languages!

Considering how dependent we have become on technology, it’s safe to say that computer programming has become a literacy that everyone should learn (and eventually master). Coding for kids shouldn’t be some sort of extracurricular activity that only forward-thinking parents choose to enrol their children in. It should become a mandatory course for students of all levels.

In light of current patterns, trends, and technological advancements, coding is the future. Like computer literacy, computer programming will also become a requirement for many careers outside the field of computer science. Check out the courses on Qubits home page to get a feeling of how engaging CS education can be.

Know more about us

Qubit stands for Quantum bits. It is the basic unit of quantum information—the quantum version of the classical binary bit and Quantum computing is the future of computing. Launched in 2021, Qubits is dedicated to expanding participation in computer science by helping it implement in more schools via increasing participation in young students. Our vision is that every student in every school should have the opportunity to learn computer science and thrive as learners, citizens and leaders in the digital age. We believe computer science and computer programming should be part of the core curriculum in education, alongside other science, technology, engineering, and mathematics (STEM) subjects.

What is Qubits CS Curriculum?

Each module on the Qubits platform is based on fundamental computer science and simulates realistic problems that a modern engineer may encounter, with similar design constraints. The collection of these modules forms Qubits CS curriculum that is designed to develop the skills students need today and provide a solid foundation that will guide them to future success.

We propose this futuristic model curriculum that integrates computer science fluency and competency across the school level. We serve as a catalyst for widespread discussions and the initiation of many pilot projects that can take the evolution of K–12 computer science to the next level.

How to buy the Qubits Curricula?

Individual Modules are not yet open to buy. But if you are a school staff or administrator and are interested in Qubits Curricula, all you need to do is click on book a session now and our support team will guide you through. While selecting the best modules, choose the one which satisfies your school’s needs as well as keeping in mind your current students’ level.

Qubits is a web-based platform. Most current browsers like Microsoft Edge, Internet Explorer,Safari, etc will work on Qubitscs.com. For best performance, we recommend the latest versions of

If I get stuck with Qubits, from where can I get support?
We have a dedicated support team that is on standby for such kinds of events. To make the implementation process easier, we assign a project manager for the school who will address all such technical issues as well as any content help/assistance as well or email support@qubitscs.com